You are here: Home1 / The media about us

Academic Dane Munro from the university of Malta has written a research paper on “pilgrim coaches”, using the Walk of Wisdom and our volunteer and pilgrim coach Lidia van Engeland as a case study. It was written in the International Journal of Religious Tourism and Pilgrimage.

Here is the conclusion.

Conclusion
The Walk of Wisdom is a prime sample that a pilgrimage route can be invented without losing any of its ‘pilgrimhood’ significance and relevance. The lack of historicity and religiosity is not regarded as a negative but as a positive issue. Newly designed routes or trails need to have an extra dimension or drive, otherwise it is just an empty path. In this case, environmental sustainability was the inspirational drive. […]

Motivations for going on a pilgrimage do not seem to have changed much, the yearning for fulfilment seemingly unaltered. Millennia-old pilgrimage phenomena are still very much alive in the experiential world of the recently invented Walk of Wisdom, including near revelatory appearances of Homeric similes, moments of synchronicity, (divine) provision and providence. Spaces are provided for recognisable rituals, similar to those developed over time along the historical pilgrim routes and trails.

What does seem to have changed for many people, is the purpose and content of pilgrimage, shifting from walking to come closer to God, to come closer to oneself, not to save their soul but to save the world. Fulfilment has made great strides in the register of meaning, as now the celebration of good things in life are added as motivations to embark on a pilgrimage, while in the past, the emphasis rather was on sin, injustice or illness. Secular pilgrims are discovering the spiritual benefits of pilgrimage to overcome the inadequacies of some of their character traits, their insecurities or fears.

Due to secularisation and loss of knowledge of pilgrimhood, its preparation and execution, the services of a pilgrim coach are a welcome addition to the field of pilgrimage and pilgrimage studies. In the past, the established Church prescribed what a pilgrim should do and feel. At present, people may feel at a loss what to do, as those prescriptions have been spirited away by secularism. Nonetheless, human needs and the human need for fulfilment remain the same. Pilgrim coaches are filling a large need gap, providing new insights and managing to give old remedies new relevance. Since psychology and health sciences have taken an interest in pilgrimage, it is foreseen that this will lead to a new direction in pilgrimage research over the coming years and the application of its findings by healthcare and health insurers.” 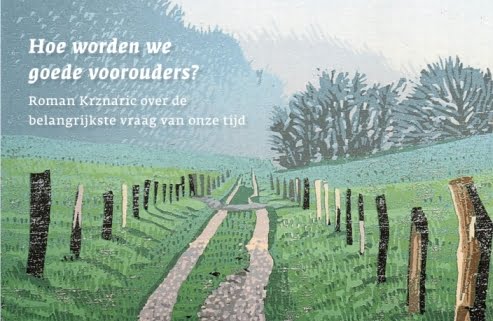 The Vruchtbare Aarde (Fertile Earth) magazine tries to get to the ‘inside of things’. The last issue contained a report by pilgrim Herman Heijstek about his Walk of Wisdom. The issue is in Dutch!

The overarching theme of this issue of Fertile Earth was how do we become good ancestors? A question that the English philosopher Roman Krznaric recently asked in his book of the same name. Krznaric appeals to the best of mankind that has shown in history to be able to think ahead, beyond the shadow of it’s own generation. From pyramids to cathedrals to the welfare state, we as humanity can work towards a future beyond ourselves. With that same horizon we can make our society sustainable, says Krznaric. Now live like a good ancestor for seven generations on.

I like this way of thinking. Our individual freedom is related to our interconnectedness. Only thanks to everything that generations have built up before me, can I live in the prosperity with which I grew up in the Netherlands. Thanks to the food that people elsewhere sow and harvest for me, thanks to nature that converts the energy of the sun into edible matter, I can exist. I try to contribute something good so that the web of life becomes stronger.

Read the article by Herman Heijstek. The article itself is not so much about good ancestry, but about “slowing down”. The article is in Dutch however!

Slowing down – that’s what people often think of when making pilgrimages. This summer, Jessie Jager featured in Runner’s World and Women’s Health with a completely different experience. Jessie walked our 136 kilometer trail not in one or two weeks, but 16 hours. Yes, 16 hours! By running.

How meaningful that can be, she tells Women’s Health :

“A day like this is grueling, but also very impressive. Friends and family walked along, you experience everything very intensely because there are no distractions. There is only the path, you, and the lovely people who support you. It puts things in perspective. The start and end point of the Walk of Wisdom is at St. Steven’s Church, which towers far above the city. I had visualized what it would be like to finally see the tip of that tower, that kept me going. Once I saw it, I was overwhelmed with emotions. No matter how hard it is, there will always be a good moment, or a solution. That’s what I try to pass on to my children. I now know how far perseverance can take you. ”

Her pilgrimage was an ode to her inspirator Jaap, she writes.

“That’s what Jack would say. 25 years ago, supreme joy and intense sadness were so close together.

I was almost 15 and was in 3 gymnasium of the Lorentz College in Arnhem when in 1994 the call came to sign up for the musical Bumper: a self-written production inspired by West Side Story. I jumped on, I wanted to get on that stage and I was going to audition! After rehearsing as a dancer for over a year, I was standing together with all the other, more than 100, participants receiving thunderous applause in the city theater of Arnhem. “Three evenings the great hall was destroyed!” Jaap said in his last speech. Jaap was the choreographer, the man behind the direction and the set. Outside the musical he was a gym teacher and owner of a ballet school. But above all, he was an inspiration to everyone. His creativity, decisiveness, perseverance, positivity and ability to bring out the best in people was a big example for me. He saw where there was nothing to see for others.

And then, 11 days after the red curtain was drawn and there was partying until the wee hours, suddenly the thump of Jaap’s death came. My world stood still, this was incomprehensible as a 15-year-old. The farewell was beautiful; once again an overcrowded hall and again as the last song Somewhere. Jaap would be in my heart forever and many times in my life I would find answers thinking, “That’s how Jaap would have done it.”

Then suddenly I saw a pole with a symbol

The years passed. I have now been working for more than 15 years in Nijmegen at a secondary school where I, as a production manager, make a major contribution to beautiful musicals. I have left the dance world behind me for a while. But I still like to move. Running through the woods and mountains is what I love to do. We are lucky that there are beautiful nature reserves around Arnhem and Nijmegen.

So is Berg en Dal. The forest I became acquainted with while running 3.5 years ago. I was taken in tow and pointed to the most beautiful paths and the most magical light when I suddenly saw a pole with a symbol on it. In a moment of bewilderment, I saw in that symbol the logo of Jaap’s ballet school. That was very special. While I feel so happy and energetic, it seems to me that Jaap is dancing around. The symbol on the pole turned out to be part of a pilgrimage route called the Walk of Wisdom. A 136 km long pilgrimage trail that starts at the St. Stevens Church in Nijmegen. You only have to follow the posts and you have all the time to think about life.

As my trail run ambitions developed,to walk this trip in one go does not seem to be a bridge too far anymore and I’m making plans in preparation. I will dedicate my Walk of Wisdom to Jaap, because in my experience he dances around there. I’ll be ready in a few weeks. I look forward to this day when I will have memories of the past 25 years around me on my longest journey ever. And when it’s heavy and tough I’ll think:

Nice: we are in an English magazine – Buneke. The magazine and the site focus on positive change in the world, on ‘world changers’. Glad we’re part of that…

It is not often that we are in an English magazine. Good example to follow?

Read the article via Issuu: link.
Or start with the front cover: link.

The article was written by Marion Verweij.

Our Walk of Wisdom won the people’s award in the election of the Gelderland province for quality of landscape. The jury selected us to the top five, but awarded it’s jury prize to a smart city project in Arnhem resurfacing an old river in the inner city. The public voted Walk of Wisdom as no. 1 with 336 votes, a clear sign of approval from followers.

Pioneer Damiaan Messing: “We see this as a big thumbs up from pilgrims who walked our trail and took the rather tedious and elaborate effort to vote for us. We promise to invest the €10.000,- in the further development of a meaningful, ecological sensitive rite to inspire those who walk the talk of self realization and sustainability.”

From the press release of the province of Gelderland: “Out of 1712 votes for 15 projects the Walk of Wisdom came out strongest. The stunning diversity of landscapes around Nijmegen as mirror to the soul. With on the road a symbol as compass telling us man is not separate from nature, but part of it. ‘A pilgrimage to reconnect with life, nature and our surroundings: a pearl’ – one of the voters motivated.”

We can but blush… Thank you to all our supporters!

The prize was awarded by one the board members of the province Josan Meijers and former vice prime minister of the Netherlands Jan Terlouw.

The winner of the juryprijs was het stedelijke beeklandschap de Sint Jansbeek, refiguring one of the old streams of Arnhem in the city and thus tranforming the public face.