From every donation for our starter packs, we set aside €1 for nature and the landscape along the route. At the end of December, we helped Natuurmonumenten (+-Dutch national trust) with €240 for the beautiful Hunting Lodge Mookerheide, right on our pilgrimage trail.

The Hunting Lodge appeals to our imagination. It was allegedly built to impress a sweetheart – in vain. In World War II it was the headquarters of the feared SS. But it is also the place where Catholic sisters have taken care of displaced girls. A woman who lived there as a girl once told us how loving she had experienced the help of the sisters.

Pilgrims of the Walk of Wisdom have been walking past the Hunting Lodge for years. While the lodge was slowly fading at first, it is now clearly regaining allure. During the restoration, no fewer than 16,000 beautiful mosaic tiles were revealed, which were previously hidden under a layer of stucco. We have now adopted sixteen of those tiles.

Would you also like to adopt a tile for €15? We raffle a free tour of Natuurmonumenten, among who does and sends us an email or puts a reply on Facebook. The Hunting Lodge is easy to reach: it is within walking distance of Mook-Molenhoek station. The date of the tour will be announced (some time after restauration). Help Natuurmonumenten and

About Redactie Walk of Wisdom 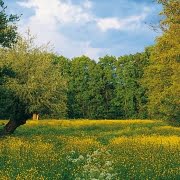 We support the Delta plan for the Landscape